The beginnings of DHF can be traced back to a business dedicated to hardening railroad rails. At present, the company uses all kinds of heat processing technologies to make products that are of extremely high, reliable quality. Our foundational “rail hardening” skills began from nothing: no labs, no preceding technologies, and no alternative.
To talk about this phase in the history of our company, it is necessary to address the early engineers who are now referred to as the Seven Samurai: Gen'ichiro Hirayama (company president), Tatsumi Okamoto (engineering), Tomoyoshi Kuroi (design), Hisashi Hirota (heat processing), Taro Tanabe (sales, administration), Hifumi Hagita (general affairs), and Tsutomu Muto (heating technology). These are the people that got together for the common purpose of starting a high-frequency induction hardening business to reduce wear and down time on coalmining equipment. 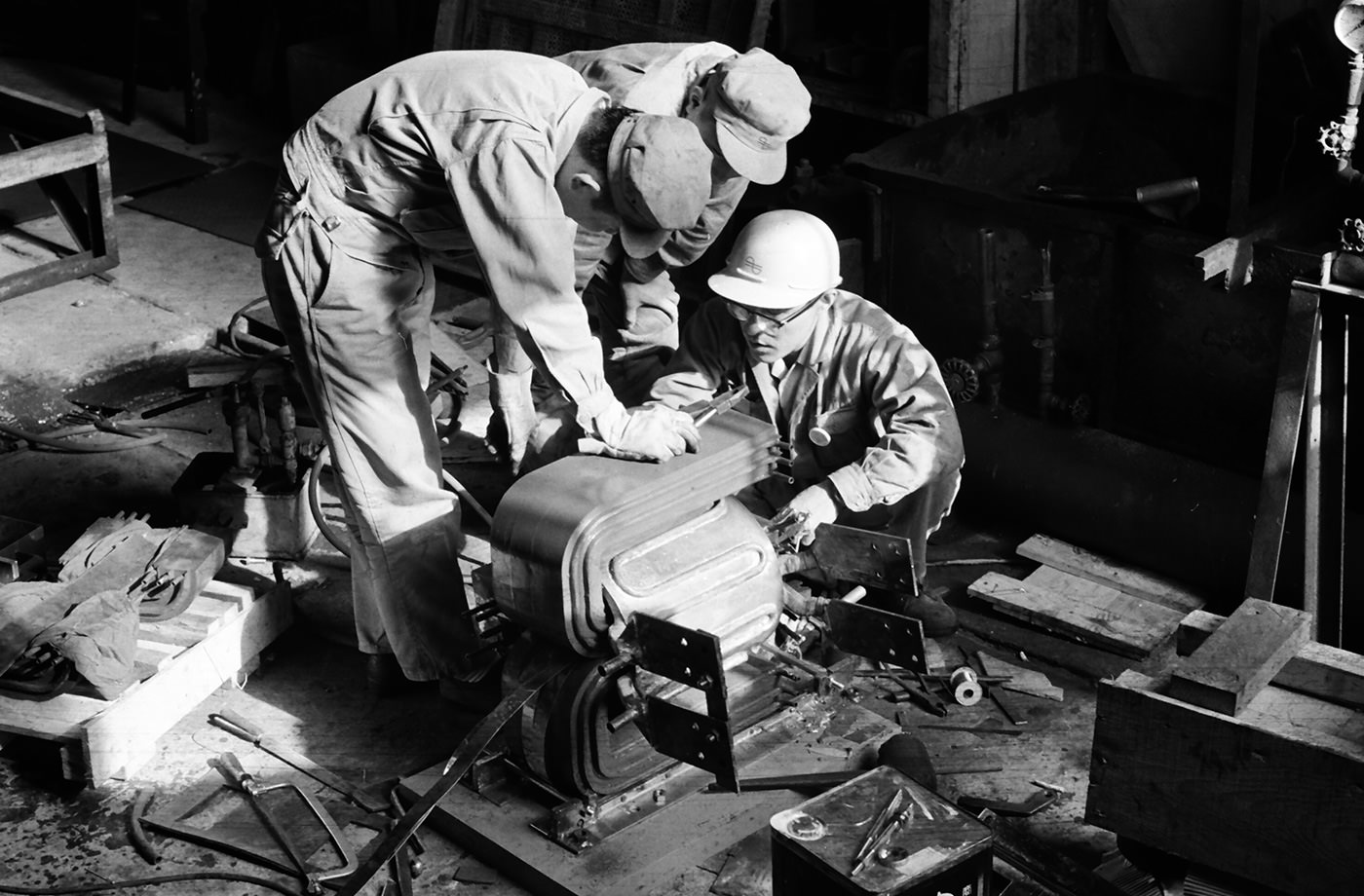 A venture company that started with limited resources

Our company began as a project that was started in 1950, not long after the end of World War II and at a time when sufficient resources were unavailable. The equipment used at the time for high-frequency transmitters (spark-gap transmitters), was expensive and difficult to obtain. One of our competitors, namely Kawasaki Heavy Industries Aerospace Company, began using the spark-gap transmitter technology they had developed to generate high frequency electric current. The "Seven Samurai" of our company pursued their own technologies, continuing by a process of trial and error, until they eventually developed their own high-frequency transmitter technology. At the time, however, this high-frequency induction hardening technology was not something that was guaranteed to become successful and widely used. These seven samurai, however, made these high-frequency induction heating coils to heat the small components of customers' machinery, Making them according to the needs of customers, and patiently developing a business out of high-frequency induction hardening technology. 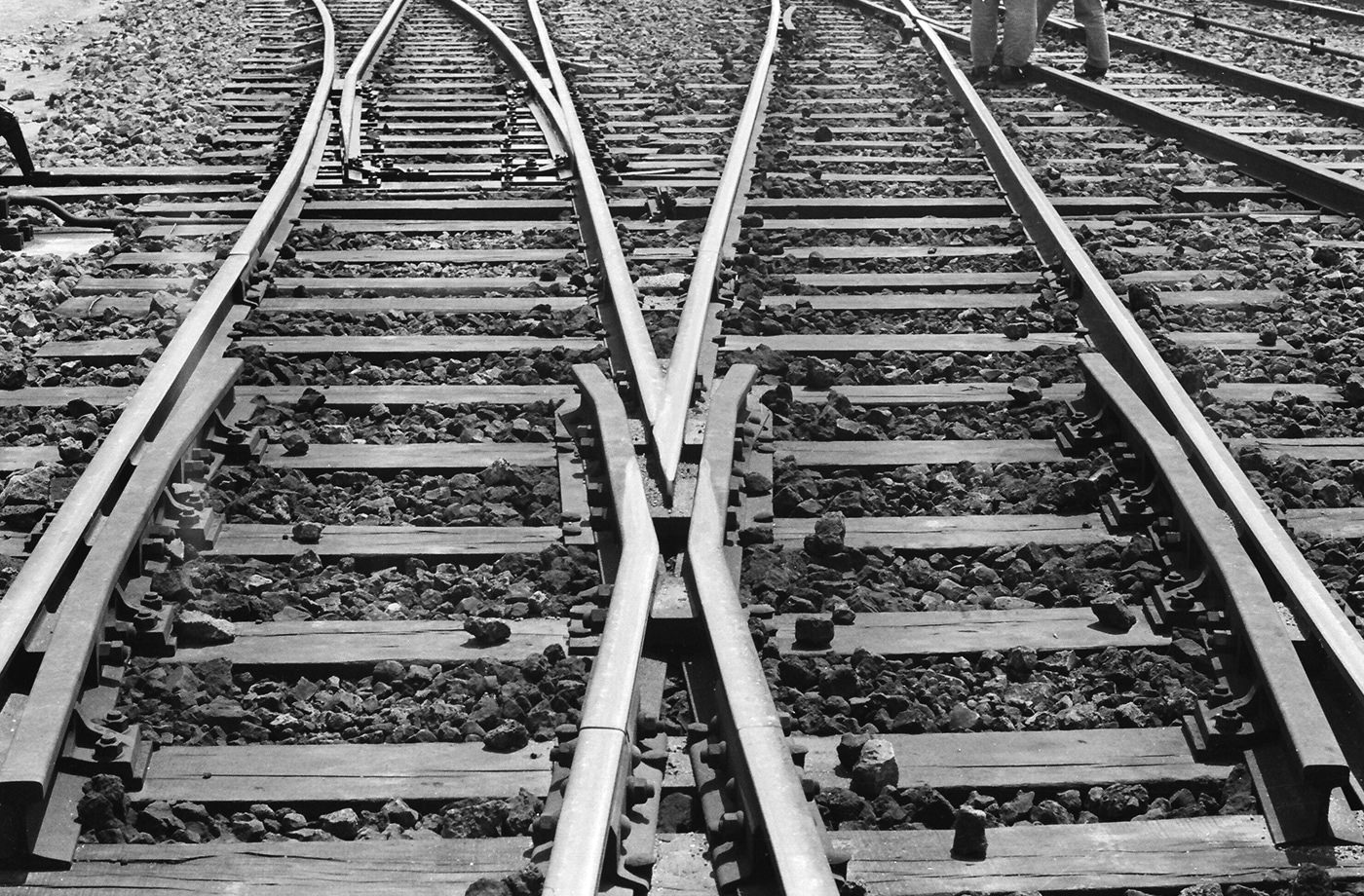 Confident that DHF technologies could benefit Japan, the company held direct negotiations with the government

It was only two months after the project was conceived that these seven samurai began working to develop technologies to hard the steel used for train rails. The company surmised that because high-frequency hardening technologies can be applied to prevent the wear of metal, there would be great demand for such technologies for quenching train rails. To actually perform the work of quenching the rails, which was a vastly larger job than hardening equipment components, motor-generators were necessary.

The members involved found out that the government at the time was planning to transfer the production of electric-generators to the Philippines as a means of our reparations, but the members intervened with the Ministry of International Trade and Industry and GHQ (the Allied government authority in Japan) and pleaded to get the contracts. Upon repeated direct negotiations with the authorities responsible for the contract, DHF tried to convince them that “For the post-war restoration of industries, we will ensure that this electric-generator technology will be put to use for the benefit of the world.” After extended discussions, it was finally decided that DHF would be responsible for heavy duty electric-generators to use for induction hardening of railroad rails. 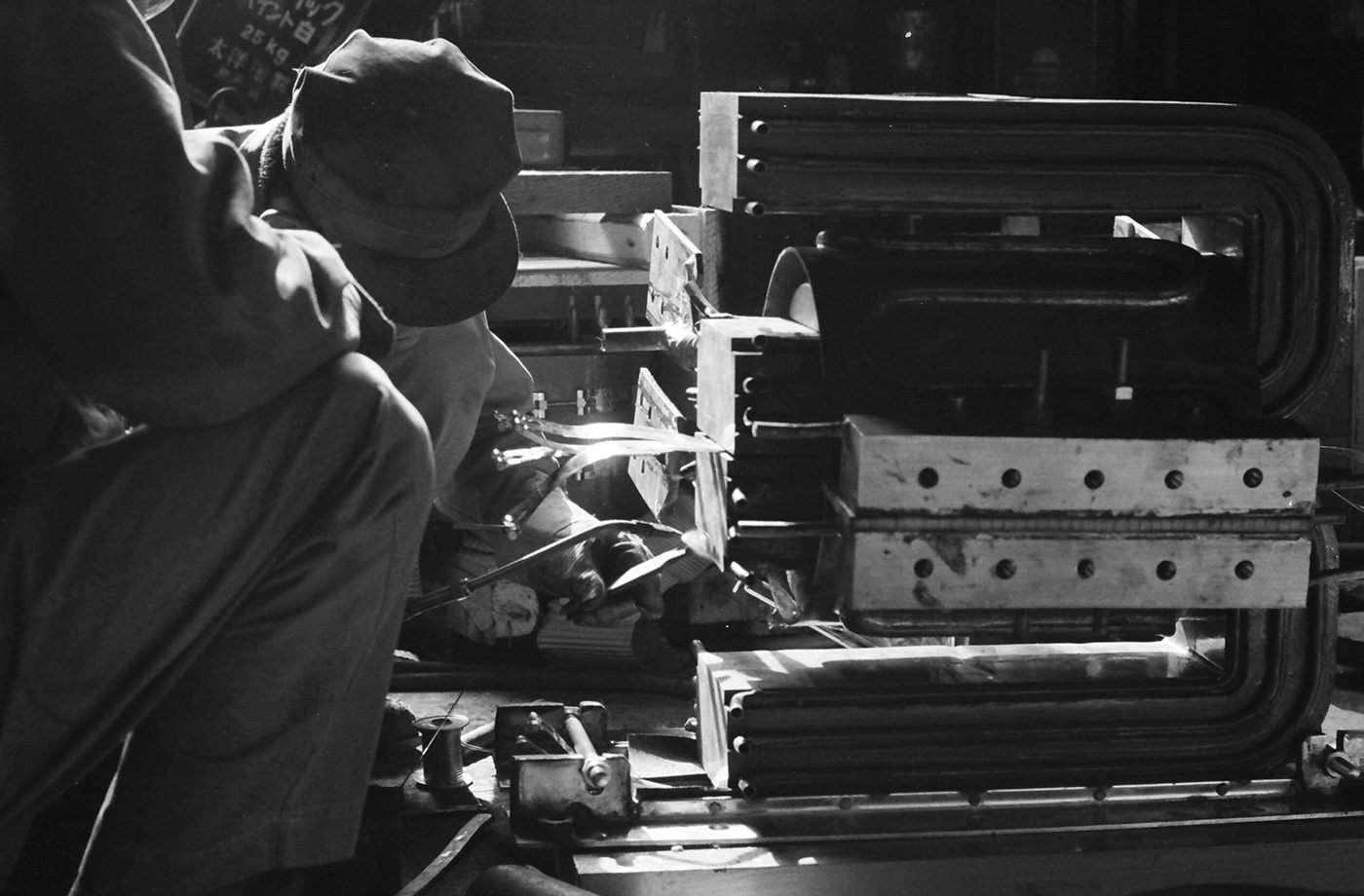 One difficulty is resolved and another arises. Yet these samurai did not give up.

Nevertheless, difficulties continued to follow. Even though there was a request from the national railways company, it was not possible to hard all of the rails immediately. There were two main issues with hardening the rails. The first issue was developing coils suited to hardening rail sections about up to 25 meters in length. The second issue was the establishment of hardening techniques whereby the distortion of the rails could be minimized.

There were still problems to overcome. When it seemed like one problem was resolved another would pop up to take its place. Yet the seven samurai did not give up. Although there were plenty of requests from the national rail companies to harden rails, the hardening technology had not yet been perfected. There were two main problems. The first was developing heating coils that could harden sections of rail up to 25 meters in length. The second was limiting rail distortion during the hardening process. These requirements proved to be such a high barrier that the head engineer at the Yahata Works facility, which was slated to head the development project, said, “We shouldn't be heat-treating rails. If there is a failure we can't take responsibility.” Nevertheless, the engineers did not give up. Even the dedicated experimental rails at that time could not be used freely, which led to delays in research. Still, the engineers at DHF spent about a year developing reliable hardening technology. The company eventually persuaded the authorities to let them take rails back to Yahata Works to harden there. After some tests, the head engineer rescinded his previous statement. He became the foremost advocate of the project, and came to fully cooperate on Japan's rail hardening project.

The technology used in rail hardening project was the first of its kind in the world, and who later DHF received the Okochi Memorial Technological Award, which is often said to be Japan's equivalent of a Nobel Prize.

Following-up, the head engineer at the Yahata Works facility at the time, later went on to become a director at Nippon Steel Corporation. He even established a production line specially for DHF at his facility. There were, however, many other engineers that, in the face of many difficulties, left the company. If the original seven samurai had stumbled along the way and as a result quit DHF, we would not have the DHF of today. Thinking upon it now, the DHF Spirit, which continues today, started back then. It is because those engineers believed in their own technologies that DHF is the company it is today. 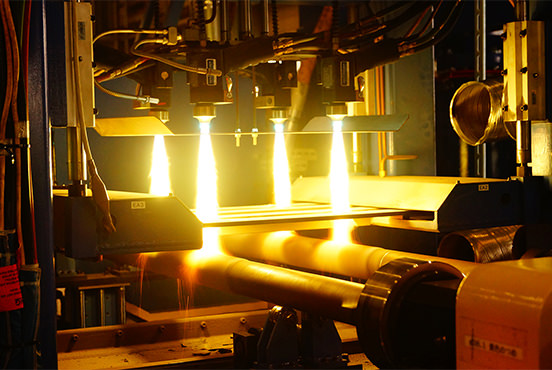 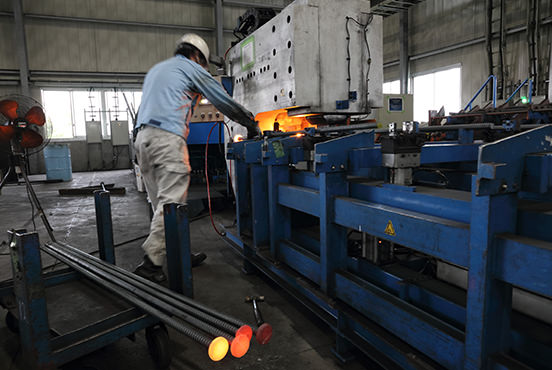